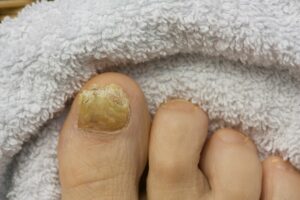 Why are my nails so ugly? It could be a fungal nail.

As summer approaches, the sandals and open-toed shoes are coming out.  By this time, we take stock of our feet and toenails. Many may not be so happy about how they look!  But often toenail appearance is due to many different issues.

What Can Cause This Unsightly Toenail Appearance?

How Do I Know If It Is a Fungal Infection?

Fungal nails have different appearances from thin and brittle to thick and discolored.  Most often, they appear thickened, with a yellowish discoloration, and may even have an odor.  Sometimes they are brittle and are not attached at the end of the nail.  If this happens, the nail may fall off by itself and a new nail grows in its place. But just judging a nail by its appearance can be deceiving.  The most accurate way to determine if a nail is affected by a fungus is to have a biopsy taken.  At our office, a biopsy is performed and sent to a pathology lab to determine if it indeed is a fungus.  If it is, very often the lab can narrow down which genus and species it is.

How Did I Get It?

Believe it or not, fungus is an opportunistic infection.  It is everywhere! Most commonly, it is in areas that are dark damp, and enclosed.  Common areas to find fungus lurking may be a nail salon/pedicure area, gym floor, locker room shower, or at the side of a pool.  Since it is opportunistic and everywhere, it simply needs a chance to get under the nail.  Sometimes, trauma is the cause of the nail slightly uplifting from the nail bed, even for a fraction of a millimeter.  Sometimes it may not be direct trauma, but it may be micro trauma that allows the fungus under the nail.  What is micro trauma, you ask?  Micro trauma is often seen after a repetitive pressure on a toenail.  For example, we see it with runners, where the repetitive trauma may actually be the big toenail pressing up against the top or end of the running shoes.  Now a few times is fine, but if a runner may take more than 10,000 steps a day, and with every step, that micro trauma adds up to trauma to the nail.  The fungus itself actually lives on the toenail bed, which affects the appearance of the nail.  Once it finds a toenail bed, it thrives.  The crusty debris under the nail, or as doctors refer to it, “subungual debris” is actually formed by the fungus on the toenail bed.  No matter how much you may try to clean it, it will come back the next day unless it is treated.

What Else Could It Be?

If the biopsy does not come back as a fungus, the second most common diagnosis is nail dystrophy.  This means that there is damage to the nail causing its appearance; its thickness is not due to a fungus.  Less frequently we find that it is psoriasis, which is a manifestation of an autoimmune disease.  Often if a patient has a psoriatic nail, they have already been diagnoses with psoriasis and are undergoing treatment for skin problems in other areas. 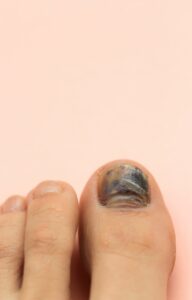 How Do I Get Rid Of This Nail Fungus?

Now this is the million dollar question! If someone had a fool proof treatment plan, then everyone would be following it.  Just as nail fungus is opportunistic and difficult to predict how and who gets it, it is important to treat it from all angles.

At our office, we have topical and oral options.  Our first line of topical treatment is Tolcylen.  It is a topical antifungal with other compounds to treat the thickness of the nail and allow penetration of the medication, with a convenient brush to allow you to apply the medication under the nail as well, because remember, it actually lives on the nail bed.  But most importantly, when treating the nail fungus, the environment must be treated as well.  If a patient has a nail fungus, he may have a concurrent athlete’s foot infection.  The same fungus that causes athlete’s foot also causes nail fungus, so a topical cream may be prescribed to treat the skin as well. Our office carries Tolcylen cream for athlete’s foot.

Do I Have To Treat This Fungal Nail?

In a word – yes.  If it is not treated, the condition could become worse.  That fungal infection on one toenail can spread to other toes or to the other foot, or even worse, can spread to the skin causing athlete’s foot, as it is usually due to the same fungus.

Is A Fungus Contagious?

As mentioned before, it is an opportunistic infection, so it is everywhere.  It just needs a chance to get under your toenail.  So yes, a fungal infection is contagious. But, not everyone will get it.  Just because a family member has it, doesn’t mean your toenails will be affecgted necessarily, but there is always a chance!  That is why it is important for the person who has the fungal nail infection to seek treatment.

How Do I Prevent This Fungal Nail From Coming Back?

You can prevent a fungal infection from returning by continuing to monitor your environment.  This may include spraying shoes, continuing topical medications from time to time, and avoiding areas or situations where the fungus may be abundant. IF there is a recurrence, then treatment of the fungus immediately is warranted.

Come Visit Us At Prairie Path Foot And Ankle Clinic

The most important caveat from this information is to understand that any time you have a question about your foot, whether it be something on your skin to any pain in the muscle, tendons, or bones of the foot, make an appointment to see your podiatrist.  Here at Prairie Path Foot and Ankle Clinic, we will do a thorough exam and formulate a treatment plan for you.

Weil Foot & Ankle Institute was founded in 1965, by Dr. Lowell Weil Sr, who was inspired by a need to progress the Foot & Ankle Care category into the future through innovation. As one of the first Doctors of Podiatric Medicine (DPM), Dr. Weil... Learn More »